Today’s installment of Sofi’s Armchair Epidemiology is all about ignorance. Specifically, our ignorance about China’s real numbers.

A few days ago, China made an announcement that they were changing how they counted COVID-19 cases. Previously, they were counting only the cases that were confirmed with a positive test. Since the tests they use have a lot of false negatives, and since hospitals were clearly too overwhelmed to test everybody, it was already clear that cases were being undercounted.

The new criteria they announced was that they would start counting both positive tests and positive symptoms — “ground glass” pneumonia showing up on scans, etc. And so, suddenly the number of positive cases jumped.

They made another announcement at the same time, though not as well-publicized. They have started dropping some patients from the count, specifically, patients who test positive but are asymptomatic. This is, of course, bullshit. We now know that asymptomatic carriers can still infect lots of people around them, so thinking that they “don’t count” is completely bonkers (that’s the scientific term for it). No doubt by dropping asymptomatic carriers from the rolls, the new total case number will look less alarming. There is no other reason to drop potentially infectious patients from the rolls.

Similarly confusing, the number of deaths doubled from what was expected in one day — theoretically due to these new inclusion criteria — but then the next day, 100 people vanished from the tally (“we realized we had double counted 100 people”). Considering how chaotic things are in Wuhan, the likelihood that they have an overcount is almost zero. Also, are deaths now being counted according to the old criteria (positive test) or the new criteria (positive test OR positive symptoms)? And what about people who die at home before they can be tested? Are they being counted towards the official tally?

Clearly China is massaging the numbers to to avoid a panic and financial meltdown. That is…not great. It also means that, without accurate numbers, the rest of the world can’t make informed decisions.

This leaves Singapore, because unfortunately, there is now an outbreak in Singapore as well.

Unlike China, Singapore has been doing an excellent job at transparently releasing information about their COVID-19 patients: 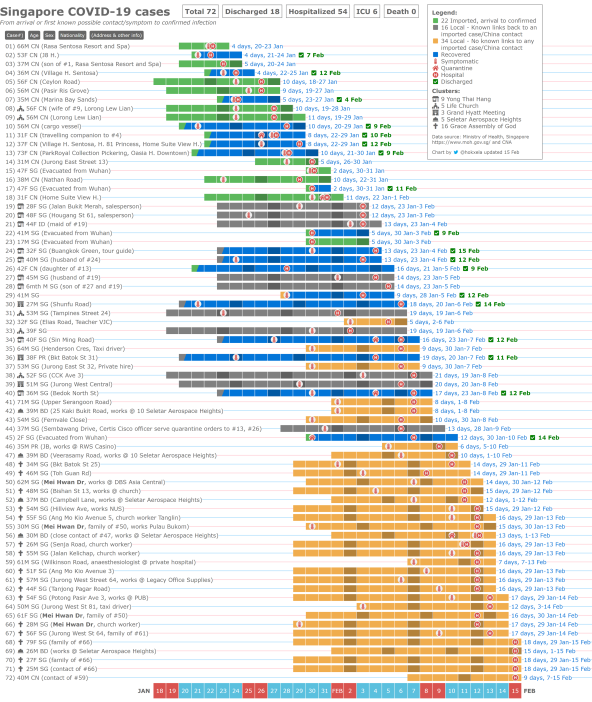 Moreover, experts say Singapore’s been doing a good job at proper public health measures. So my take on things is that the next 2-4 weeks will give us real, actionable data, and also our best shot at seeing a country nip this in the bud. Singapore is highly regarded as one of the most technologically sophisticated countries in the world, which gives us the sense that if anybody can get this under control, it’s Singapore.

Here’s what the next 2-4 weeks should let us know in terms of data:

Which brings us to Item #3: Smoking. In China, the number of serious cases skews slightly male, but the male death rate is much higher than the female death rate. Some folks have theorized that this could be due to innate immune differences between men and women, but others are saying it’s due to smoking:

Hopefully, Singapore’s advanced health system and lower rate of smoking will keep infections, critical cases, and deaths to a minimum. That is the best case scenario.

If Singapore can’t stop it, though, then…that’s not a good sign for the rest of the world. So let’s hope for the best case scenario and keep our fingers crossed.